Saturday 6th October once again saw a GGBC crew take part in The Founders Head of the River race hosted by the Société Nautique de la Basse Seine in Paris. The weekend was a masterpiece of Anglo-French coordination by Neil and Geoff. 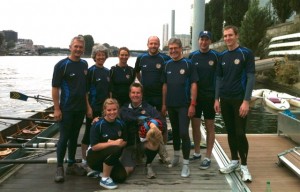 After arriving on the Friday evening by a combination of rail and air, the crew rendezvoused in the hotel bar to plan the finishing touches to the months of detailed training – such as wondering whether it would possible to get out on the water in the morning, for the first time as a complete eight, before the race in the afternoon. There was also the small matter of Geoff having heard nothing from the French club since the original invitation some months before…

A peek through the curtains on Saturday morning revealed overcast conditions but none of the heavy rain that was forecast to weave a slightly uncertain course between Pangbourne and la Défense. There were also some seriously large working barges navigating the river, vessels which would make the African Queen look minuscule by comparison. After a hearty breakfast we walked the short distance to the SNBS boathouse to find a Geoff in a relieved mood having finally received confirmation the previous evening that we were indeed expected. We were therefore able to abandon our plan to get in to their newest looking Empacher and refuse to get out until they let us race…

We were able to get nearly an hour on the water in the morning, which was both useful and exciting as it included a close encounter with one of the aforementioned barges. After the outing Pascal, the SNBS president, explained that the event was a good deal smaller than in previous years, in part due to the loss of a significant area of land previously used for trailer parking by visiting clubs. We were nevertheless magnificently looked after by our French hosts who provided a last minute protein and carbohydrate top up in the form of a chicken and pasta lunch. The performance gain was possibly tempered slightly by the addition of the pork chops, red wine coffee and cake…

And so to the race.

If we weren’t already slightly nervous about what lay ahead, we were left in no doubt by the high speed arrival of the river police in inflatable boats complete with blue flashing lights. They were there to close the river and there was a brief period of entertainment as they forced a couple of huge barges to tie up for the duration of the race. This was was serious stuff…

We were in the second wave of boats to race so we watched from the balcony as the first of the elite crews came in to view looking incredibly tidy as they crossed the line. By now it was raining gently. After a quick crew change we were out in our new boat and quickly settled in to a gentle three-quarter pressure paddle the 5km downstream to the start. It was at this stage that lunch was starting to sit a bit heavy. By the time we got to the start it was raining steadily.

After a quick spin we were away – no sitting on the line allowing the nerves to build here. After an impeccable start we were quickly in to our rhythm and a close race with an octuple on our stroke side ensued. We were neck and neck until they got the inside line on a big bend whereupon their cox’s microphone failed – at least we assume that’s what happened as we didn’t hear from her again…

We were one of the last boats off the start but we valiantly managed to hold off a couple of strong French crews for most of the race until they just sneaked past. Just as were really feeling the effects of a hard race the police flotilla moved up slightly in an effort to provide a bow wave for us to ride. We politely declined their help, insisting that we wanted the near death experience to be all of our own making. Shortly afterwards we could hear the cheers of the sizeable British crowd (Monty) and this gave us the energy for one final push for the line before collapsing in a crumpled heap. It was over, and the ambulance that had been parked near the boathouse could go home…

We quickly got the boats off the water, washed and in to the boathouse before getting out of the rain for the prize giving. We are still awaiting confirmation of our time but we are confident that no one beat us in the mixed overseas class. SNBS seemed to have quickly got the measure of us when presenting our prize – two bottles of champagne!

After a quick return to the hotel to shower and change in to dry clothes we returned to the boathouse where we were once again treated to some wonderful French home cooking and an impromptu wine tasting hosted by Pascal. After a long, convivial evening we finally wandered tired, slightly stiff but very content through the rainy Parisian evening back to our hotel.

Sunday dawned bright and sunny and allowed for some sightseeing before heading for the Eurostar for a late afternoon journey home.

Thanks are due once again to all at SNBS for welcoming us superbly, especially considering that they managed to provide lunch and dinner for about twenty people given just a few hours notice. Special mention should go to their president, Pascal, the captain of their recreational section, François, and the two coxes who bravely volunteered to go out with us.

We hope to be able to welcome them to Great Britain sometime in the not too distant future.