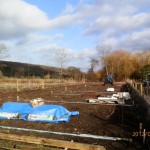 Hardwick site – where the scaffolding and boats will go

Those of you who have been down to row recently will have see the changes next to the Boathouse:

We have marked out the Hardwick site for the scaffolding which will eventually comprise the racking for our boats.

The equipment hut base has been laid with hardcore and levelled, the central area where the hut sits to within an astonishing 1 inch all over (Andy used a laser).

The right hand side (the entrance) and the left hand side (the toilet) may be finished off with levelling sand and paving stones later  if there is enough budget in the current estimate.

The base of the equipment hut has been made and laid and is currently in place, levelled off and ready to receive the sides and roof that will turn it into a hut. 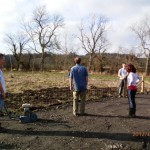 Hardwick site – the base where the pavilion will go

The locations for the scaffolding racks have been laid out by Roger and are clearly able to contain all the boats we had hoped for during our residence here.